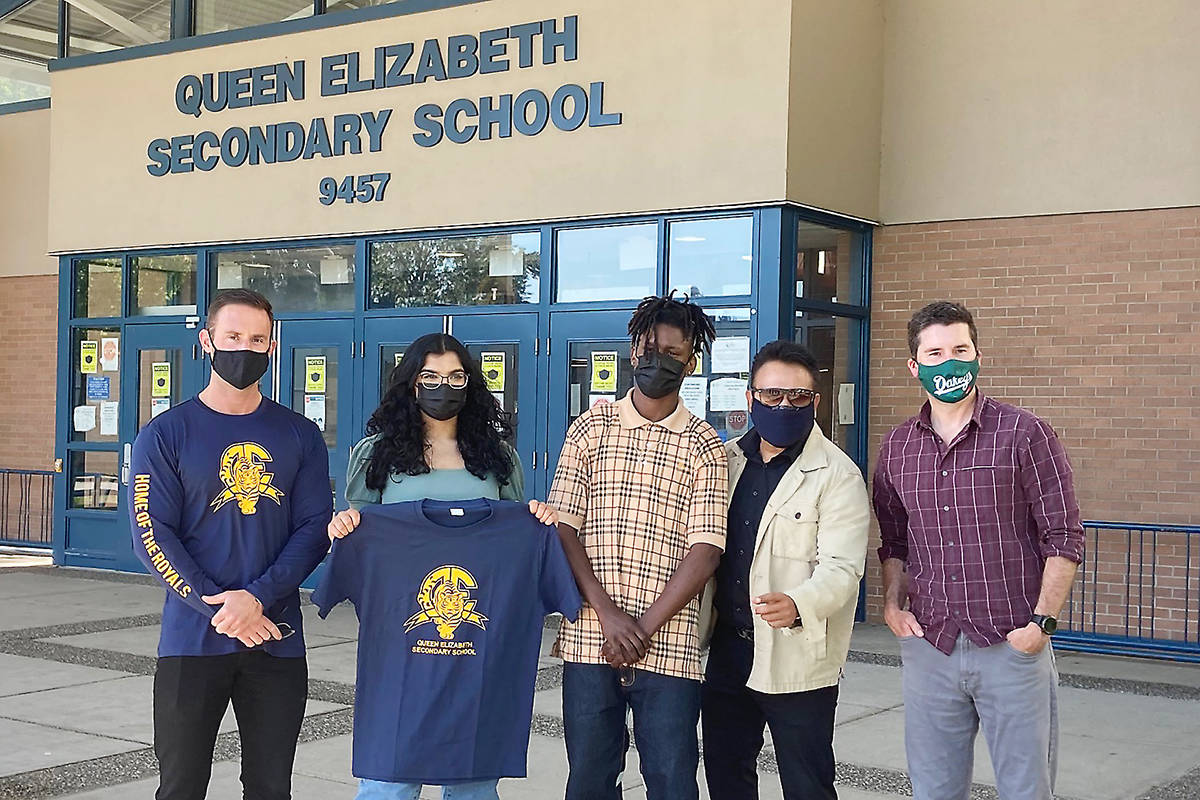 The White Rock-based artist made a name for himself on the international bhangra-music scene years after graduating from Queen Elizabeth Secondary, in North Surrey.

Now he’s giving back by providing five $500 scholarships to students there and other Surrey-area schools, along with mentorship to help them navigate the entertainment business.

“When you hear their stories, I get tears in my eyes,” Randhawa said. “It’s amazing what these young students can do, it just blows me away.

“But they have a lot of questions about the next steps – ‘Where do I go, what do I do?,’ you know,” he added. “Those are the questions I had when I was growing up, so now I can show them a path to travel, with the grants available, the opportunities that are out there, to make a viable career.”

Randhawa recently met with the students to learn more about them, and also have them learn a bit more about him.

Born in the U.K., Randhawa eventually made his way to Canada with his family, and settled in Surrey. His R&B-influenced music career began taking off in the early 2000s, and he’s been creating popular songs ever since.

In 2020 he became the first Canadian South Asian artist to earn Best International Artist honours at the UK Bhangra Awards, and was congratulated in the House of Commons by Surrey Centre MP Randeep Sarai.

“We as artists should remember the people who helped us grow, the people who made you who you are today, and QE (Secondary) played a very, very big role in who Luv Randhawa is today – the people, the mentors, the coaches, everyone,” Randhawa said.

“I played badminton and was quite a good player and played collegiate afterward, and the big thing for me is I remember the coaches and principals, the teachers, who were rooting me on forward, and that included arts and entertainment. For me that was drama class, and the amazing teacher Mr. Robert Jacques, who now lives in France. He was so instrumental in our student body success today, just a great man.”

With Surrey “getting a bad rep in the mainstream media,” Randhawa sought to give back with the scholarships.

“It’s not just about the money and the GPA, it’s about putting them on a mentorship program with me – that was crucial for me to do with these students,” he noted.

“Back in my day, there was nobody to say there’s a scholarship in arts, to go forward with that, so what I did, my team and I, is decide this was a good way to give back to the community.”

Randhawa aims to have Gracy contribute artwork for an album cover of his, and Kenny will work on some music with him.

QE careers counsellor Jeremy Lendvoy set up Randhawa’s meeting with Gracy and Kenny, and arranged for a TV news crew to document the occasion.

“It’s a really heartwarming story of a former SD36 alumni giving back to our talented students,” Lendvoy said.

Three other scholarship winners will be announced this month.

Randhawa said he’s currently making music with plans to perform live when COVID restrictions are lifted. Listen to his new “Believe in Me” album songs on luvmusic.ca.

“We’re starting the new album, the English album, and we just completed the last Indian album now, which will be ready for release in the next few months,” he said.

“Hopefully we can get back to performing soon,” Randhawa added, “and I can’t wait to hit that stage again. I’m ready – everybody’s ready for that release. We’re getting a lot of inquiries about performing, for festivals and a tour. The album’s done well and is still doing well, so that is making things start to move.”

As for the two QE Secondary scholarship winners, Gracy will attend SFU School of Contemporary Fine Arts this fall and Kenny is continuing with his music career.

“My artistic style is ever-changing, it’s never the same consistently,” Gracy said in a news release posted to surreyschools.ca. “I’m still developing my style but I want to reflect more world issues in my artwork, like feminism and equality.”